What do you think - viable option, or overkill? 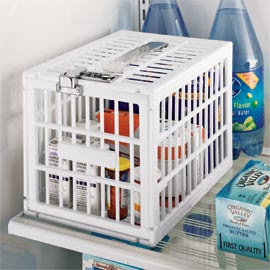 Fridge Locker
I'm thinking overkill when utilized for BLT reduction, but completely viable when used to keep coworkers from stealing your lunch in a community fridge :)
2 comments:

This morning, the Fooducate Blog touched upon an article from Saturday's New York Times:
Fixing a World That Fosters Fat via It's Not Our Personal Fault We're Fat
In a nutshell, the NYT makes the argument that it's damn near impossible for Americans to make healthy food choices and incorporate exercise because of our environment.

I call Bull Shit.  While it's true that the current environment is not conducive to easily living an optimally healthy lifestyle, laying the blame outside of oneself is just plain folly.  The only portion of the above statement that I will concede to is the lack of supermarkets in inner cities (although from what I can see here in NYC there is no lack of availability, I can't attest to the situation in other parts of the country).
The NYT article suggests cutting agricultural subsidies as a way to equalize food pricing and influence people's eating habits.  The thought there is that "if we cut the subsidy on whole milk and made it cheaper only to drink low-fat milk, people would switch to it and it would save a lot of calories." - (Dr. Barry Popkin, professor of nutrition at UNC).  This is akin to the proposed taxes on soda and juice that many states have attempted to pass in the recent past.
But why are we passing the buck?  Just because the easy choice is to hit the drive-thru, whose decision is it to make?  It's ours.  No one holds a gun to our heads and tells us to buy the frozen entree.  No one backs us into a corner and makes us grab a burger and fries instead of a baked potato and chili.  There is no one holding your grandmother hostage, refusing to release her if you don't buy from Mr. Softee instead of the fruit cart.
Sure it would be great if the cost per calorie worked in favor of the apple over the happy meal!   But just like politics, the change has to start at home.  YOU do the difficult work, consciously make the decision to eat to nourish your body.  Set a good example for your family, your friends.  The change can trickle UP.  From you, to your children, to their friends, to their schools.  From you, to your social circles, to your merchants, to our legislators.
It won't happen by limiting choice (taxing treats).  It will only happen by embracing choice.
The buck stops here.
5 comments:

Someone asked me once if running was like riding a bicycle, in terms of "you never really forget how".  My response was "Yes, if that means falling on your face and skinning your knee a few times until you get the hang of it again".  While you obviously don't forget how to run, you simply can't jump back in where you left off.  No matter how badly you want to.  The mind may be willing, but the body just isn't able.
Of course, that doesn't mean most of us don't try.  Many of you are probably guilty of jumping back in before you were ready.  I know that I'm pretty much the poster child for such behavior :)
But there are some amongst us who are smarter.  Patient.  Wise.
They know not to beat themselves up for finding a once easy run, difficult.  They know that before you can run long, you need to run strong.  They know not to measure their success in mileage, but in effort.
And this applies to most all forms of fitness.  You can't pick up the barbell where you left off.   You can't expect to be as fast or as agile.   You can only be present.
So don't beat yourself up. Own your experience and remember that hard work isn't measured merely by distance or pounds.  It's measured in sweat and heart.
5 comments:

For women who pee standing up.  Seriously.
4 comments:

I don't own an iPhone, and I'm generally revolted by the sheer number of idiotic Apps that are out there (though the lightsaber one is pretty cool).  But if this one works the way they claim, it might just be incredibly kick-ass.
Cereal Scan by Fooducate
Basically,  you load the app on your phone and hit the stupidmarket.  When you find an item you're interested in, you use the iPhone's camera to take a picture of the barcode.  The application will then translate all the gobbledy-gook that passes for an ingredient list and rates the product compared to other comparable items, tells you the calories per serving, gives you the item's traffic light rating (Green = good, Yellow = so so, Red = not so good), lists information that the food company may not want you to know, and then offers healthier alternatives.
I know that many of you, like me, don't buy much that actually comes in a package.  But you've got to admit that in the quest to be an educated, healthful consumer this type of application is pretty damned neat.  And a heck of a lot faster than using your phone to Google the things you're unsure of ;)

In particular, I think that an app like this will be most eye-opening when applied toward "health" or "sport" foods, like protein bars, supplement drinks, etc...
No comments: