Edited to state: After going over my records, my first day of Elements was actually March 18th, 2008. This is what I get for assuming Gillian had her dates straight :) I did, however, take my first beginner's class with Josh Newman on March 12th, 2008. Registered (and paid) for Elements on March 12th, 2008. But the actual FIRST day of Elements with Keith Wittenstein was on Tuesday March 18th, 2008 and met for 2x a week until April 10th, 2008.

I came to CrossFit the way many do: with a healthy portion of word-of-mouth and just a sprinkling of self-masochism thrown in for flavor. I'd first been introduced to CrossFit through posts in the UltraRunning community, and my interest was piqued. I found the local NYC affiliate (right down the street from my office), and took a break from work to hit up their free beginner's class.

I signed up for Elements later that evening.

And so I find myself sitting here, reflecting back on a year of CrossFit. Surprisingly enough, it's a pretty difficult task. On one hand, CrossFit is not the beginning and the end of me. On the other, it has become a very large part of what I do. To say that it has changed my life would be accurate, but deceiving.

When I came to CrossFit last year, I was running. A lot. I had run a 50k in January (on a whim), and had done maybe 1 or 2 more by the time I began Elements. I continued to run a bit in the gym during Elements (generally getting a few miles in before we started) while running NYRR races on the weekend. Two days after Elements ended, I ran another 50k (the race report was the impetus for this blog, actually). The following month (May 2008), 2 more. Over the summer, I continued to run and CrossFit. Trying to fit them both into my schedule was tough - and ultimately I failed terribly at that. Long story short, the balance between training and running slowly became very skewed towards training. I managed to eek out minimal training for the NYC marathon (including running another marathon as a training run), after which my running slowed down to a trickle. But that's an entirely different discussion for another time :)

While my running was being sorely neglected, CrossFit was flourishing. I went for my Level 1 Certification in August, road tripping to VA with 3 of my friends from Elements. Continuing to train regularly in the early mornings, I was getting stronger, my training was focused and most of all I was having fun.

I was also gaining weight, fighting with my boyfriend, and getting increasingly depressed about the lack of running I was doing.

And here lies the crux of the problem. CrossFit can become so all-consuming that you lose sight of everything else. Early morning workouts meant getting out of the house before my boyfriend even woke up. Getting home too tired to go for a run. On the diet front, CrossFit bombards you with so many nutritional resources that your head spins. The Zone, Paleo, Neo-Paleo, Primal, IF....I started tweaking an already clean, measured diet while at the same time my running had a severe drop off and as a result not only did I gain weight, but I was completely mental about food (ew, Gluten!).

As the year closes, most all of the above issues have been resolved. I train with a friend mid-day at a globo gym very close to my office, so the boyfriend and I have more time. I've gone back to eating the way I always did, and slowly my weight is returning to normal. The only thing that remains is getting back to running at something close to the volume and speed I was running in '07/early '08.

But the thing that really stands out as the greatest benefit? My friends. Forged in Elements and sheathed in sweat. Though we don't always train together, we are stronger - together. 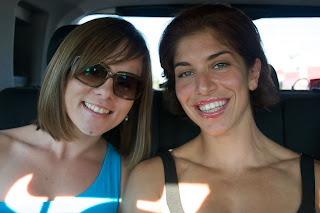 You'll have to just imagine Dan, since he's taking the picture :)
Oh yeah, did I mention that I have some pretty rockin' muscles?